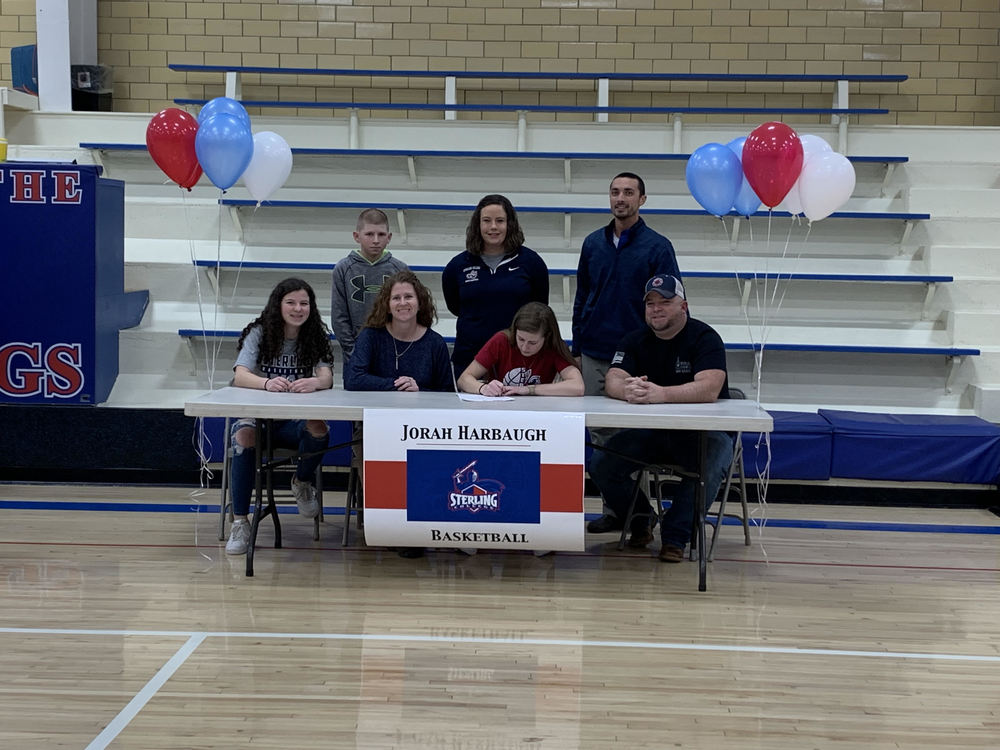 Jorah Harbaugh signed with Sterling College to play basketball in the fall of 2022.  Jorah is the daughter of Eric and Jenny Harbaugh and sister to Joley and Emmett Harbaugh.  Jorah has been STUCO President, volleyball state runner-up, state track qualifier in the 4x100, 4x800, and 400 meters.  Jorah is a Bulldog Buddy and has refereed for rec ball through the years.

"I usually wing these talks but since it was for somebody else this time I decided to write some stuff down.  This is a special day because from what I have found out is that we have not had a girl sign to play college basketball in over 20 years, the last of which may have been your mother.  Earlier this year Jorah asked me to write a letter of recommendation so she could receive a scholarship from Sterling College.  That letter was pretty easy to write because when you use words like 4.0 GPS, respectful, dedicated, determined, trustworthy, and a leader that makes any college pretty excited to have you come.  As a basketball player, she has also become pretty special.  Averaging 12 points per game on 37% shooting from the 3 point line, 4 steals, and 4.5 assists per game, she has improved every part of her game this year.  From a good 1.5 assist per turnover ratio last year to an incredible 4 assists per turnover this year, she has become quite the matchup nightmare for her opponents, but not only is she gifted offensively, but her defense has also become quite tenacious as well, even tying a school record with 10 steals in one game.  So now with over 700 career points, 200 rebounds, 200 steals, and nearly 300 assists it is clear that you will be remembered.  That you for everything you have done for this school and this basketball program.  Sterling is getting a special player and an even better person.  Enjoy it and let yourself be great!"